Marco Boerries is one of the most successful German IT entrepreneurs and personalities. Inspired by a student exchange in Silicon Valley, Marco Boerries founded his first company,
Star Division, as a garage company in Lüneburg at the age of 16. With it, he marketed the StarOffice software as an alternative to Microsoft's Office packages. StarOffice was sold over
25 million times. In 1999, Boerries sold Star Division to Sun Microsystems for a high doubledigit million sum. With Star Finanz and VerdiSoft, two further company foundations followed, which developed into significant providers in their industry. He successfully sold both companies - most recently VerdiSoft to Yahoo in 2005. With his fourth and current business idea, Marco Boerries started in 2009 and founded the company NumberFour AG, which has since been renamed enfore AG. After 8 years of development and almost 40 million US dollars of capital from financial investors, enfore AG went to market with its solution in March 2017. The idea: businesses from the retail, hospitality or service sectors receive a complete solution consisting of hardware and cloudbased software with which they can conduct their business. As a recipe for success, Marco Boerries relies on a cooperation with Telekom, which provides service and support and distributes the solution as MagentaBusiness POS throughout Germany, for his fourth company foundation. enfore AG is considered one of the most ambitious IT start-ups in Germany. 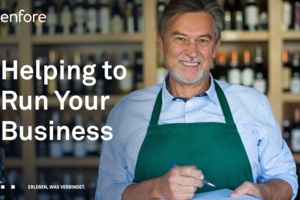